Fall is nearly here! Have you noticed those pesky little stink bugs starting to come up out of their caves to wreak havoc on your backyard picnics and gather in the corners of your ceilings? If so, Dominion has you covered! We’re no strangers to the stink bug scene, and we’re here to make sure your home stays free and clear of the little stinkers.

What Are Stink Bugs? 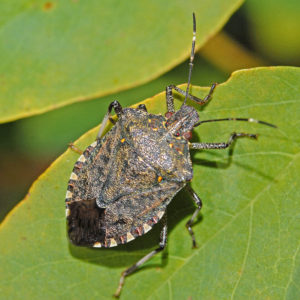 Firstly, you’ll need to be able to identify stinkers in all their brownish-gray glory. The stink bug that we see around here today is the much more formal-sounding “brown marmorated stink bug (BMSB)” originally from Eastern Asia. This makes them an “invasive” species, since they are a species of foreign origin.

Stinkers were originally collected in Allentown, PA in 1996, but not recognized or identified until 2001. By then, the species had infiltrated the entire east coast and is now found in 44 states across the country.

Why Are They Stinky?

Stink bugs didn’t get their name for their unpleasant mottled brown color – they actually stink! But why do they stink? Stink bugs actually have a gland on their abdomen from which they spray a chemical when they feel threatened, causing the unpleasant odor with which we’ve become familiar. The smell is compared to strong herbs such as cilantro and coriander – though, interestingly, some people cannot smell the chemical produced by stink bugs. Lucky them!

What Can I Do About Them?

While it can appear that the only problem with stink bugs is their ugly appearance and annoying habit of appearing in your house, there’s actually a bigger problem with the little stinkers. Stink bugs love to feast on fruit trees and ornamental plants, which has the potential to damage the agricultural industry and destroy crops.

There are sprays to deter stink bugs from attacking plants, but how do you keep them out of your home? Try to seal any cracks or gaps in foundations, window and door frames, attics, and siding. Make sure your window screens are tight-fitting; if you have a fireplace with a chimney, make sure the flue is closed when it’s not in use.

Having a major issue with the little stinkers? Give Dominion Pest Control a call at 717-393-7879 to chat! We’re the experts in tackling an annoying infestation, so contact us to rid your home of the annoying pests and enjoy the fall weather in a stink bug-free home!