Dominion Pest Control is a leader with stink bugs control in Lancaster and York Counties. Getting rid of stink bugs has become our forte as they increasingly have become a nuisance to our area. 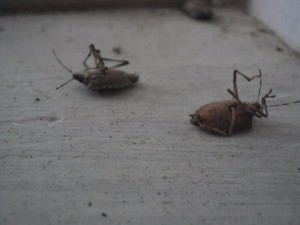 No one knew for sure exactly how stink bugs would behave on our continent since being introduced in 1998 to Allentown, PA. “I sounded like an alarmist three years ago,” said owner Greg Pettis. “I kept telling everyone that the stink bugs were going to get really, really bad—people just looked at me like I was from a different planet.”

Pettis made these predictions based on reports from home owners in Allentown where the stink bugs first arrived, naturally anticipating a counterattack: controlling the stink bugs with Powerspray. This is what separates Dominion Pest Control from the other pest control companies. “We treat all the areas where stink bugs try to enter, leaving them ‘dead at the door,’ so to speak. You can’t stop them from flying to your house, but you can make them “Dead on Arrival.”

Our approach to stink bug control is second to none. Trust us with your stink bug infestation. Call us today for your free qoute: 717-393-7879